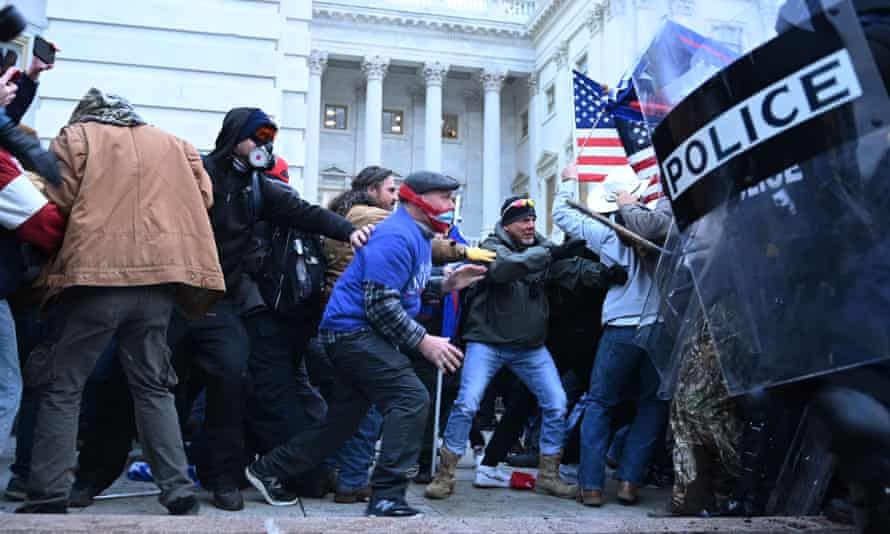 A small town’s local pizza shop owner was feeling down. His previously constantly busy establishment was now empty inside at all times, and deliveries dropped by way more than half. Pandemic’s restrictions, and customers ‘dining out’ cashflow drop, caused for him to barely make enough to cover business expenses, and no money left for his family. He is ready to put on a mask for diners, but the damn Mayor won’t let him open inside. Turning to social media, he yells at the local government, blaming it for his woes. His rich customer base connections follow suit in support, blaming the Mayor, and before long he eggs his supporters to come out with him to demand the Mayor changes rules.

He didn’t actually go, but his supporters showed up en masse, some armed, to the State House, and angrily demanded to speak to Mayor. With no desired outcome, they overran a small and unprepared contingent of local law enforcement, storming the building itself, sending lawmakers running, scared of the mob. Tragically, a young woman died in the process. After some confrontation with police, she was shot. Mayor didn’t show up. The shop owner was nowhere to be found. Realizing they likely just committed a felony, by taking over State House, his supporters slowly dissipated.

Retribution was swift. The sheriff himself, angrily, showed up to the pizza shop, with handcuffs ready in hands, charging the shop owner with felony murder and inciting riot. His supporters, whomever wasn’t arrested on site, were slowly getting visits from law enforcement. The entire town would never forget this scary day, confirming once more the importance of order.

And then a United States President did something like that, and a woman got shot and killed, and hundreds of people invaded the United States Capitol, Senators, Congresspeople, and a Vice President of the United States were sent scrambling, with Secret Service rushing the VP through back alleys. Offices of the Capitol building got ransacked, threats for top lawmakers blatantly made, building windows and doors broken, and the world, along with United States watched in absolute shock.

With less than 2 weeks left, do they file new Articles of Impeachment? Would that stop tomorrow’s riot? Probably not, but how many more similar situations will he arrange in the next 13 days, while HE STILL HAS POWER or the countless days ahead of us, when stripped of executive power he’ll still command loyalty of his supporters? We’ve made it this far. He got burned and learned today. We want to say that.

We want to say that, because we’d rather ignore an attempted coup, than cause us further discomfort. 2020 was so turbulent. We’ve said it, when we (some of us) voted for him in 2016. We said it, when he discriminated against Muslim countries and called African nations ‘s—hole countries’. We said it, when he took away the children and ignored the sick at the Mexican border. Come to think of it, we said it first after that Access Hollywood tape. After that, porn stars and Playboy models, even while married,  seemed almost brag-worthy. What a stud! And unlike Cosby and Weinstein, he’s so smart, he never got caught! He even outsmarted the IRS (granted, none of us love that bit of the government much, but most understand the necessity of it). We said it when he nominated an alleged attempted rapist to Supreme Court. We said it when he was impeached. We said it, when he abandoned Kurdish allies in Syria to be slaughtered, after fighting our battles for us for years. We said it, when he egged on supporters to do exactly this before on the state level, which luckily didn’t end up in a death, but ended up in armed civilians occupying the State Building in a state whose governor is a woman Democrat. Over 74 million people said it on, or leading to, November 3rd 2020.

And it got us to a siege of our own symbol of the US Government and a needless death. That’s not even counting an interrupted session of Congress and some hospitalized cops.

Where is the town sheriff to put the handcuffs on the President? Besides poor media coverage and some disgust from those, who already can’t stand him, will he suffer any consequences? Perhaps after January 20th the new government will get it to it?

Here comes a better question: Does Merrick Garland  want to spend his first 4 years on the man, who’s dodged everyone from labor unions to banks to IRS, and most recently Leticia James just to accumulate more wealth and really stick it to everybody? Does the nation ignore the grief of over 350,000 pandemic-caused deaths for the sake of pursuing the man, who brought us shame? Does the nation, as divided, as we are now, need to keep the flame burning? Perhaps impeaching him, this time successfully, and teaching him this final lesson, as well as ensuring he’d never try to be our President again, be the best way to handle this?

Or perhaps it is our, hopefully, last outrage to this man’s actions. And as usual we’ll let it go. Only won’t it make us all guilty of sedition then?