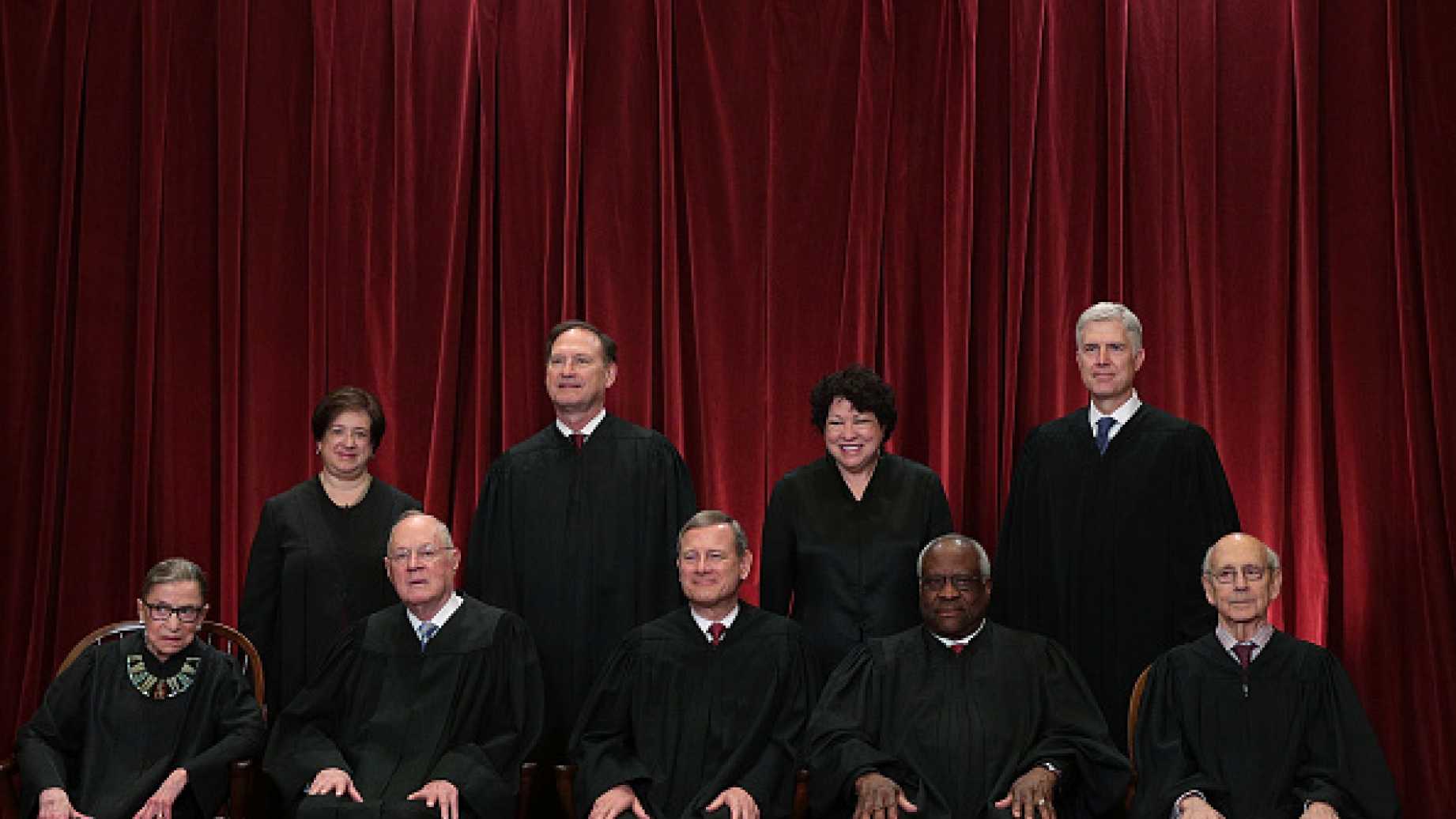 The hottest topic all around is the latest round of Supreme Court decisions and the next Supreme Court Justice, after Justice Kennedy announced his retirement. Some view it as a purely political situation, others view it as a ‘bird’s eye view’ or a ‘macro-situation’, which won’t affect the common folk and some just don’t care. It is indeed not a situation, which affects us all at an instant. Yet, it does affect us far more, than Mexican kids separated from their parents by ICE; a tragic shooting at a Maryland newspaper; or just about any single issue facing our country. While no isolated incident, tendency or topic affects every single person, we live in a lawful country, and courts decide the future of our country, not individuals, be it a right-wing or a liberal extremist. Since 1789, SCOTUS has interpreted our laws. Interpreted is the key word here. Whether a cake shop owner wants to only make cakes for heterosexual weddings or a private citizen wants to avoid paying labor union fees, it is a selected group of 9 judges, which decides, whether the law was properly understood and applied.

The goal is simple: our system of checks and balances must prevent any person or institution from taking advantage of people and has thus far prevented our 250-year-old democracy from turning into an autocracy. As always, understanding any given issue requires for us to understand how we got to where we are. When in 1620 some Brits decided that following the Church of England wasn’t their idea of religious freedom, they embarked on a quest, which after plenty of pains and struggles, gave us our wonderful US of A.

Religious freedom was the goal and it was accomplished.

When feudalism began to fail the world, and technology advances, no longer stifled by the likes of inquisition or similar, birthed mega-factories, as a way of life, suddenly it became painfully obvious that slavery stifled our growth, not promote it. Add to it the purely ‘human’ factor of being a developed society based on freedom and laws, where some of the people were treated no better than animals, and we got ourselves the 13th Amendment.

Slavery was abolished in 1865.

As technology caused industrialization and job specialization, factories made it possible to have large groups of people produce plenty of goods in small confined spaces. Large agricultural fields were no longer necessary, people were able to work constantly, not only during certain seasons, and big cities were born. Citizens clung to those cities for more work options and to be surrounded by growing opportunities of any sort. Manual work began to move on the background, making it possible for women to be just as productive, as for men. Women no longer were just responsible for raising kids, keeping a neat home, and helping out in the barn, they contributed to the country’s economy.

On a hot June summer day in 1919, women got the right to vote along men.

As the world was hit by WWII and entire groups of people were facing extermination, technology became a weapon in a fight for survival. The atom was split, and it wasn’t long till Hiroshima and Nagasaki changed the way people look at technology advances forever. War and war-related atrocities impacted our planet in ways so scary, that a single advisory, and at times enforcing, coalition of governing nations was formed.

1945 brought us the United Nation.

As Lock’s way of thinking triumphed Hobbes’ depressive outlook on individual liberties, it was actions of individuals, which changed our world. Mass media and sports allowed entertainment to become America’s favorite pastime.  People like JFK, Martin Luther King Jr., Muhammad Ali, Elvis Presley and many more changed the way our citizen’s viewed the world within our States. Individual liberties started becoming more and more crucial, in the interest of making societal advances. Combined with the almost 60 year old 19th Amendment, that took Judiciary efforts in a different direction.

Skip a few decades and seemingly technology advanced our society geometrically, with major advances no longer taking as long as an entire century or even a generation. Environmental dangers from fossil fuels and oil dependency thrust renewable energy onto the scene, albeit with missteps. Internet allowed companies to service consumers on far more advanced ways, such as e-commerce. Social media, with MySpace, Facebook and LinkedIn put blogging and other, at times useless and shallow, and at times intense and relevant, forms of personal expression into the spotlight. Gay rights were formed and expanded; racial discrimination became that much more of a stain on our democracy, especially once we got our first black President; legal representation gained power in protecting our rights; assisted suicides, legal marijuana, and much more kept us the country always moving forward and generally way ahead of others in terms of individual liberties.

Liberties provided for individual advances and individual advances provided liberties. Technology became a tool of personal achievement, and it went well beyond Bill Gates, Steve Jobs, Michael Dell, Sergey Brin, Jeff Bezos and others. College education became almost an expectation, giving the country a higher-qualified labor force. Women went from being almost exclusively housemakers to occupying positions of power and great influence, from Hillary Clinton to Oprah, Angelina Jolie to Serena Williams, and the list goes on. Immigrants began to take a greater role in influencing our society, from one of the most famous scientists of all times, Einstein, to more modern movers and shakers, like Sergey Brin (Google), Rupert Murdoch (21st Century Fox), Liz Claiborne (Liz Claiborne Inc.), George Soros (Soros Fund Management), Jan Koum (WhatsApp), Arnold Schwarzenegger (actor, politician), and literally millions more people, who weren’t born on this land, but have influenced, and continue to influence our great nation.

Then a different type of a struggle began in this nation. The ‘forgotten’ people of this country, who managed for work for the Post Office their entire life and yet mortgage a nice house and put kids through college, suddenly felt that they were no longer getting the bang for their buck, as they did at one point. Capitalism empowered by Reaganomics shrunk the middle class, minimum wage basically equals poverty in most cities, and consumerism almost forces every self-respected teen to demand a $1,000 iPhone X, as opposed to cool new sneakers. Recent tax reform allowed for large companies to make more money, while not resulting in higher wages for the ‘regular folk’, and better education abroad allowed for many immigrants to take excellent jobs in the USA long ago, as politicians continue to discuss free education in the country, while doing little to nothing about it.

A revolt began, aimed at reliving America’s Golden days. The most unlikely, extremely politically incorrect, and obsessed with wealth accumulation New Yorker became the face of that movement – Donald J Trump. His first significant act was installing Neil Gorsuch to the Supreme Court and the 5-4 decisions began to roll many of the now-titled ‘liberal’ advances back. Labor Unions, formed to protect the American worker, took a hit; voting rights suppressed by making gerrymandering legal; and travel ban from certain countries was allowed to take place.

As Anthony Kennedy decided to retire and wrote a ‘My Dear Mr. President’ letter, it seems that the President, Republican-controlled Senate and Mitch McConnell are set on appointing a new SCOTUS Judge before the November elections, and talks of repealing Roe v Wade already began. With net neutrality already dead, which seemed impossible just 2 years ago, it seems that same sex marriage may be next, and many more changes on the way to rolling us back.

What’s wrong with the free-market approach in net neutrality or Bible-mandated refusal of homosexuality, one may ask? How about late term abortions, when a human being has almost been formed in a woman’s body already? There are plenty of pros ands cons on each of those topics, and most of them seem sincere and reasonable, whatever they advocate. What’s wrong with limiting freedom, in the interest of anything at all? Those questions are mostly political, not economic, and may influence your chances of the next job for better or for worse. However, it is a fact, that a woman, who has a child at an early age, instead of going to college or developing her career, will earn less, and will likely pay less taxes, have a lesser impact on the society, and potentially will become a burden on the current welfare system in our country, as opposed to positioning herself in life first, and engaging in procreating efforts later. A gay man, who feels suppressed by the system, where he can’t marry the person he loves, will either feel alienated by the society and result in less of a positive economic impact, or will begin to ‘fight the power’, instead of focusing on work/making money. Even the limited or more expensive internet access to certain mediums, a result of abolished net neutrality, is likely to stifle internet use, and thus better education or even consumerism.

The law of the land of the United States of America is not under attack, but the American values are, and when they are backed up by the law itself, it is our way of life, not just a way of thinking, which becomes affected. While most decisions made by politicians, and especially Judges, are made with the best intentions, albeit opinions certainly differ, we must stop viewing our country as a land of liberals and conservatives, but only view it as the land of the free. After all, that is what has always propelled the United States of America to be ahead of others economically. That is the ultimate goal, and unlike a Phoenix, we won’t regenerate through fire. We may just burn and only live on through the pages of history, not unlike most other superpowers of the past, Babylonian, Roman, Mongolian or more recently USSR.